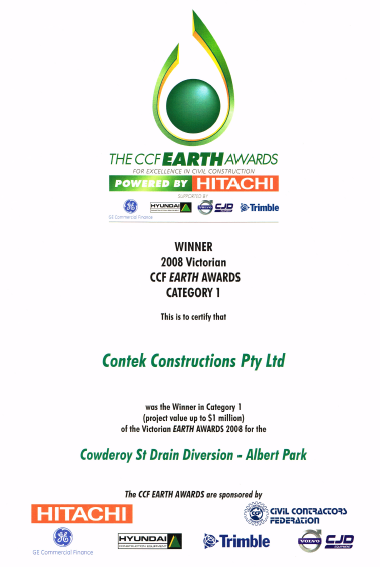 The Cowderoy St Drain diversion is a water harvesting initiative by Parks Victoria at Albert Park, Melbourne. Contek Constructions was engaged by Parks Victoria to complete the works which included a Gross Pollutant Trap, a 200,000 litre storage tank, a large junction chamber and a collapsible weir on an existing Melbourne Water main outlet drain.

Whilst Parks Victoria was the client, it had gained funding from Melbourne Water and the Department of Sustainability and Environment, all of whose requirements needed to be met at the design and construction stages of the project.

The overall, long-term benefit of the project is to catch and store water that would otherwise end up in Port Phillip Bay, through cleaning and storing the water in underground tanks. This water is then pumped into Albert Park Lake as the main storage device. The water is then taken from the lake as irrigation through the park and potentially, the surrounding suburbs.

While there was no immediate impact on the community to construct the project, there were substantial benefits. Parks Victoria had site specific requirements including water handling on site, disposal of excess water, rubbish removal, major events during and following construction, tree protection and site protection. Melbourne Water also had site specific requirement with a high emphasis on environmental issues and quality management.

This project is a first for the state. Initial calculations during low flow (no rain) are that 300,000 litres of water is cleaned, pumped and stored into Albert Park Lake each day. During rainfall periods, the capture is significantly higher with the intention to install larger pumps which will significantly increase this volume.

Among the unique features of this project were the many considerations and constraints which included working on a live main drain which runs at full capacity with medium rain events, excavating through an old tip site, ground water encountered at 2m and installing a collapsible weir into a large junction chamber.

Construction, programming and sequencing was a critical component to this project. The deep excavation required the need for crane access, up to 120 tonnes, the installation of pre cast concrete of up to 10 tonnes and the stainless steel collapsible weir were other features of the project.

Temporary weirs were constructed and the use of 150mm diesel pumps running 24-hours a day were needed to manage the low flow water.

The innovative concept of a collapsible weir, the first in the state, allowed the project to capture large amounts of water at low flow and allowed high flow events to continue to flow through the structure. This was the main requirement of Melbourne Water as the risk of flooding up-stream was high. This risk needed to be analysed during construction as invert levels were established up-stream and overflow pits examined.

At the completion of the project, the immediate work zone was restored to its original condition with minimal pit lid and access points visible. Since the completion of the project metered records show that more than 45 million litres of water has been delivered to Albert Park Lake. This water has been cleaned through the Gross Pollutant Trap and is considered cleaner than other inflows into the lake.

The project has the potential to be extended and Parks Victoria is already planning to install more and bigger pumps into the storage pit. There is also provision for an extra Gross Pollutant Trap to be attached to the main chamber and extra storage created. Contek has installed a future use balancing pipe under the chamber to make future additions possible.